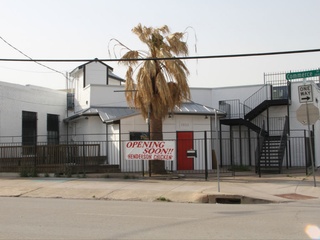 Chef Brian Luscher joins the exciting stampede into Deep Ellum: The chef and co-owner of The Grape has snapped up the space at 2653 Commerce St. for Luscher's, his long-coming Chicago-style hot dog joint featuring his Post Oak Red Hots.

Luscher, who previously signed a lease for a space on Gaston (that subsequently fell through), has snagged one of the coolest underdog spaces in Deep Ellum. Situated on the corner of Commerce and Pryor streets, it is centrally located yet long neglected. In 2011, a member of the Henderson Chicken fried-chicken chain family tried to open a branch there and executed a costly remodel before she had to walk away from the deal. In the mid-2000s, it was a dance club called Wax, and it opened briefly in 1993 as Live Minnows, a bar co-owned by ex-Philadelphia Eagle John Telschik.

But its longest-running and best-known tenant was the late '90s punk-rock Sand Bar. "I keep having people tell me it's where they used to go drink underage," Luscher jokes, who says that arriving at this location feels serendipitous.

"You know, I looked at this spot before I looked at Gaston," he says. "It didn't work out at the time, and then I stumbled onto the Big E's space on Gaston. I poured all that money down the drain to open there before I ran into problems, and decided to look at this again."

The Sand Bar had an upstairs and a downstairs, with a layout that felt both large and yet too confined. "It was an awkward room," Luscher says. "But with the changes from the architect and [landlord Scott Rohrman], it has a better flow, it feels good."

There'll be a little patio in the front, and the aesthetic will be "reclaimed, urban and industrial — so you feel like you're in Deep Ellum," he says. "We're actually going to make the exterior look more like it did in its original format than it does now. We want to re-Deep Ellum it even more than it is."

He's hoping to open by November, city of Dallas permit process permitting, and is tickled to be among what he calls "great neighbors" and established businesses nearby.

"Uncle Uber's is awesome. Angry Dog, St. Pete's Dancing Marlin, Adair's — which might be my favorite bar in Deep Ellum," he says. "I couldn't be happier than to be part of a fantastic neighborhood I've loved since I moved here in the '90s."

He's also dead center between two of his favorite compadres: Cane Rosso and Pecan Lodge, whose line forms along Main and Pryor.

"I should sell hot dogs to the people in line," Luscher says. "I'll hire a Red Hots hawker like you see at the ballgame and have them hawk up and down the Pecan Lodge line."