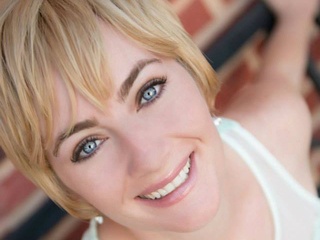 Issues of race and fame are hilariously satirized and smartly examined in By the Way, Meet Vera Stark, a play by Pulitzer Prize winner Lynn Nottage. Yolonda Williams stars as the titular Vera, a black maid in 1930s Hollywood who dreams of making it big on — and making a change to — the silver screen.

Her employer is tart-tongued screen sweetheart Gloria Mitchell, played by familiar Theatre Three actress Lee Jamison. Last summer, Lee played the dual roles of Donna and Oolie in T3’s City of Angels; the summer before she was in its production of Pippin. Until July 13, Lee is channeling Gloria’s glamour and humor.

In between many, many costume changes, she took the time to fill out our survey of serious, fun and sometimes ridiculous questions.

Where you currently reside: Oak Cliff. As an actor, I work more here than most of my friends in LA, Chicago or New York City. It’s a great time for the arts in DFW.

First theater role: Age 5, solo singing angel over the nativity at St. Monica Catholic School. Trust me: My playing an angel took major acting skills. My mom put blue eye shadow on me. I looked like Pat Benatar as an angel. Fierce!

First stage show you ever saw: I was 4. It was an abbreviated production of Cinderella in a black box theater at the Dallas Museum of Art. I remember when the stepsisters tried to get in the shoe and couldn’t, they then cut off parts of their feet to try to fit, which they indicated by putting on a red sock. Even as a tiny, I thought that was pretty clever.

Moment you decided to pursue a career in theater: My family says I came out of the womb singing and acting. I was singing “Edelweiss” and “Hello, Dolly” on the raised “stage” in front of the fireplace at 2 years old; I was directing my poor cousins every holiday in “productions” of Peter Pan by 6. I never decided. It decided me.

Special skills: Dialects. I can quickly break them down to the basic sound substitutions, imitate them and train others on them. I’ve done work for several theater companies doing just that.

Something you’re REALLY bad at: Saying no when people ask for my time. As a result, I am frequently overcommitted and overwhelmed.

Current pop culture obsession: Cat pics on the Internet. Love that this is a thing. Dog people get to bring their pets in purses and to restaurants now. Let cat people own the Internet!

Last book you read: Everything is online now. Even this publication is online! It’s rare to hold an actual book in my hands. With the length of articles becoming shorter and shorter to maintain readers in a culture growing more and more ADD and less and less able to commit time to read, well, I’m starting to become those behaviors the publishing industry is trying to accommodate with increasing brevity.

You know, I actually think the last thing I read was a book on optimizing time management. Well, I read the first half. I ran out of time to finish.

Favorite movie(s): Honestly, I’m not a movie person. I hate that the music and camera angles tell me on what to focus and how to feel. Let me have my own discovery! I also get really guilty and feel like I should be doing something else with those two-plus hours.

Yet binge-watching several one-hour episodes of Orange Is The New Black leaves me guilt-free. That said, I can watch The Princess Bride and Immortal Beloved over and over.

Guilty pleasure: Gangs of New York. Daniel Day Lewis (as Bill the Butcher) was robbed of an Oscar that year.

Shameful pleasures: The Room, Troll 2, The Apple, Death Bed: The Bed That Eats

Favorite musician(s): I have an unhealthy obsession with Michael Jackson, which started after his death. He was innocent, y’all! RIP MJ! I will buy any music involving Ben Folds. I love anything composed by Beethoven. When I’m home, I’m all about the Dinah Washington channel on Pandora.

Favorite song: You have to listen to the whole album like it’s one song: Madonna’s “Like a Prayer.” I don’t even care that she can’t sing. That album is like reading someone’s diary.

Dream role: I have two. Blanche Barrow in Bonnie and Clyde is the tragic figure of that story, but she is so convicted and strong. And Blanche, in A Streetcar Named Desire. I grew up with Southern — specifically, New Orleans — women. I get her.

Favorite musical(s): I don’t care if I’m too old for it, Spring Awakening; City of Angels has such a well-written book, it’s got to be on my list; Side Show; The Wild Party — the LIPPA version!

Favorite actors/actresses: Forget Hollywood and NYC: Some of the best actors around live and work in this town. I’ve been fortunate enough to watch and/or work with several, but the whole community deserves a shout out.

Favorite food: Ice cream. Give it to me.

Must-see TV show(s): Game of Thrones, True Blood (yes, it’s completely jumped the shark, but I really just watch it for Lafayette’s brilliance and to hate-watch Sookie), any and all flavors of Law & Order, House, Elementary, Sherlock. (Yes, simply variations on a theme with those last three.) I still maintain that the ensemble of Carnivale made it the best-acted show HBO ever made. RIP.

Something most people don’t know about you: I really consider myself more of a director than an actor. It’s how my brain works. Acting was how I got my foot in the door in DFW, and now it’s a significant portion of income I count on, so I’m not about to give it up.

There’s also the added benefit that I really enjoy it. That said, I look forward to a time when I can afford to take a “career detour” to make myself available to direct.

Pre-show warm-up: I’m an aural learner, so I record my lines on my iPhone to learn them. Once in the run, I’ll revisit those recordings just to get me back in the rhythm of the language. You know, you never think about that, but we all have a rhythm by which we operate — walk, talk, breathe, what have you.

For me, one of the most important aspects of character development is identifying in what ways this character’s rhythms are different from mine. The text is a great place to start for that. What is the inherent rhythm of the writing? What does that say about the character? Reviewing this before a show is a great mental and vocal warm-up.

Favorite part about your current role: The stakes are so high with Gloria. She has a lot to gain and a lot to lose and so much at risk. This impacts her relationships, her behavior — her costumes even. Lynn Nottage really did us a favor: It’s all right there for you.

Most challenging part about your current role: I have the opportunity to portray Gloria in her 20s and, later, her 60s. It’s a difficult balance to maintain the “essence of Gloria” but acknowledge the physical, vocal and mental changes that happen to a person over 40 years. And then, making sure my depiction of age doesn’t become a caricature. We have a lot of sixtysomethings in our audience, and I certainly don’t want to offend!

Most embarrassing onstage mishap: I was cast as Catherine in Pippin at Theatre Three. Catherine doesn’t appear until act two, and when she does, it’s a big, silly entrance. The gimmick is that she’s late for her cue, which they call twice before she finally arrives.

The whole audience was looking to where the leading player was gesturing for my entrance. I darted out for my “late” entrance and promptly fell on my tail.  The audience was horrified, but I popped back up and continued my lines. This meant I had to work that in as a gimmick for each entrance for the rest of the show. Catherine had vertigo that day.

Career you’d have if you weren’t a performer: Winemaker. No question. I have a very discerning palate. Once, at Oak Cliff’s annual “Blues, Bandits & BBQ,” I correctly identified the “secret” ingredients used in 25 of the entries’ sauces. Winemaking is the only career in which I can imagine making money off this bizarre talent.

Favorite post-show spot: When you do a show at Theatre Three and the weather is nice, the cast usually hangs out in the cute courtyard area in front of the theater. Everyone brings a bottle of wine or snacks, and we just enjoy the weather and each other’s company. If it gets rainy or too sticky, sometimes we mosey a few doors down to Two Corks and a Bottle; they have wine popsicles now!

Or, if  I’m in the mood for a complex cocktail, the newish Bowen House (that replaced Ahab Bowen) somehow offers both a swank and casual atmosphere, with consistently well-crafted drinks. It’s the only place I trust the bartenders to make me a Sazerac in DFW.

Favorite thing about Dallas-Fort Worth: How many opportunities there are for creative people right now and how strong our community of artists is. I mean, we just built an Arts District, with the arts magnet high school at the heart. That demonstrates that the city is committed to being a haven for artists for the new generations as well.

As a performer: In The True Story of the Three Little Pigs at Dallas Children’s Theater. It was our first school show, and the audience was packed. Instead of the intro for our first song playing over the speakers, a loud, deep, grating noise permeated.

Suddenly, BJ Cleveland confidently strode onstage. “Hey, kids! Are you excited to see some pigs today?” A resounding “YEAAAH!” from the audience. “I can’t HEAR you. I asked if you are ex-CITE-ed to see some PIGS?” “YEEEEEEEEAAAAAHHHHH!!!!” they screamed.

“All right! And we are excited to see you! We’ll be coming out any minute. But first, I’m sure you noticed we’re having a little trouble with the speakers, and we can’t dance to THAT!” Laughter. He continued in this manner for another minute or so, and in that time, the kids re-engaged 100 percent. It was amazing.

This moment totally reinforced that as performers, our primary concern shouldn’t be “to be perfect.” The audience doesn’t care if we are perfect. The audience expects you to communicate something to them. That’s how you engage an audience.

In this case, okay, he was directly speaking directly to the audience, but we are “speaking” to the audience by speaking to each other onstage in character too. As [Theatre Three executive director] Jac Alder says, as actors, “our primary objective is to be understood.”

Yes, he usually says this when urging us to project better, but I also know he’s urging we communicate a moment of the human experience to the audience in a manner they can recognize and understand. Because that’s our job.