Monica Greene takes over the old Tiff & Andi's spot in Fort Worth. Photo by Marc Lee 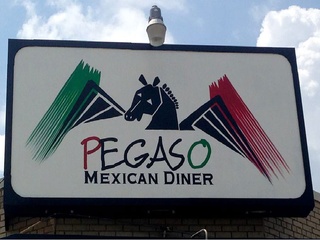 Construction permit for Pegaso Diner, opening in Fort Worth. Photo by Marc Lee

In the biggest comeback since the revival of Genaro's Mexican Cuisine, restaurateur Monica Greene returns again to the Dallas-Fort Worth dining scene, this time with the resuscitation of a short-lived restaurant she opened in downtown Dallas back in 2003 called Pegaso Diner.

But this time, she's following a westward path blazed by other Dallas restaurants such as Velvet Taco and Taco Diner by opening in Fort Worth.

It pre-dated the downtown Dallas invasion by nearly a decade and was open barely a year.

Greene was unavailable for comment, but there's no reason to think that she wouldn't reprise the original Pegaso menu of burritos, Mexican-style tacos, ropa vieja salad, fruit paletas, and Mexican sandwiches such as the torta de tinga with chicken and cheese.

Greene had been away from the Dallas restaurant scene for a few years when she returned in 2011 to open Bee Enchiladas in Oak Cliff. She followed that up with Monica's Nueva Cocina at the Ilume, which closed in a cloud of controversy at the end of 2012.

But as Eater noted, Greene has had her eye on Fort Worth since 2012.

Tiff & Andi's had a certain edgy quality; a bartender at the place speculated that they named the place Tiff & Andi's so they could have the nickname T&A's.

A contractor working on the Fort Worth location said that the finish was going to be fairly upscale, and the opening date was targeted for mid- to late July.

Monica Greene takes over the old Tiff & Andi's spot in Fort Worth. Photo by Marc Lee