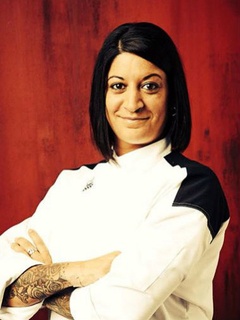 The location at 4900 McKinney Ave. gets one more chance at life, and maybe, finally, this is the one. Henry's Majestic is a new restaurant-bar coming soon to the space that was most previously Acme Social Club.

The folks behind Henry's include Cindy and Jim Hughes of Bread Winners and The Quarter; Cindy's son Andrew Popp; Bread Winners executive/R&D chef Adam Kovac; and Rosanne "Roe" Dileo, who will lead the team as general manager and take an active role in all aspects, from the menu to the bar to the front of the house.

Dileo is suddenly the It Girl: The one-time chef at Libertine Bar, who did a stint at Boulevardier and was a finalist in the last round of Kitchen LTO, will appear on Hell's Kitchen as a contestant on season 13 of the Fox series starring Gordon Ramsay. It debuts September 10.

Set to open in October, Henry's Majestic will serve an elevated yet approachable menu of small and large plates. It will also feature charcuterie from Meat Parlour, a new company launched by Kovac, who has nursed a passion for charcuterie and meat curing. Overseeing the beverage program is Alex Fletcher, noted for his work at Victor Tangos, People's Last Stand and The Quarter.

"We are thrilled to bring this culinary/beverage powerhouse team together to provide the community a one-of-a-kind dining and drinking experience," says Bread Winners VP Kendra Shier. "Talent like this under one roof is a recipe for magic."

Dileo says she was always a fan of the place when it was Acme and looks forward to giving it her own stamp.

"It'll be my little baby, but we'll also have these great systems in place," she says. "That's where Andrew, Cindy and Jim come in. They have their successful, team-oriented style applied to something like this, with a bar and higher-end food.

"They have the expertise that comes from managing a bunch of restaurants, so we said, 'Let's do something that combines all of this.'"

That said, they won't be reinventing the wheel, Dileo says. "It'll be that place where you can drink and eat," she says. "With my background, we'll make sure it's not a stuffy restaurant or rowdy bar. It'll be right on that line."

The design will be industrial-contemporary with unique "found" items. The spacious patio will be dog-friendly, with an outdoor fireplace, pool table and TVs. The kitchen is good to go, but they'll tone down the decor.

"I've been in the restaurant when it was Acme F&B and Acme Social Club and always loved that space," Dileo says. "I always thought it was so pretty, but the interior had a lot of extra stuff that was more than we wanted.

"We're losing a little bit of that barn feel and the rusty stuff. We don't want to erase it, but just tone it down, so that when you walk in, you say, 'This is Henry's.'"

The location's biggest liabilities in the past have included parking and what can only be described as a jinx.

"We'll be working with the same valet company that the other restaurants on that block use," Dileo says. "But we want to put in some cool bike racks. I bicycle a lot, and I think bike racks are as big a deal these days as parking."

As for the jinx: "Hearing that it's jinxed is a challenge," she says.

Finally, who is Henry?

"The family dog is Henry," she says. "And then we all had this connection to the name Majestic. We walked into the kitchen and the oven brand was Majestic. And we found a sign we're going to hang in a prominent spot. All of us had a connection.

"But we also liked that it doesn't say anything else. It lets us stay away from labeling and be a wonderland of food and drinks without getting into whether you're going to a 'restaurant' or a 'bar.' Being fluid is such a great advantage."