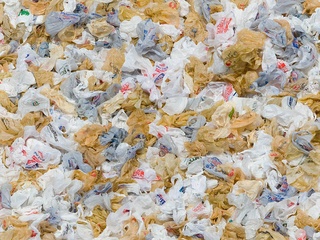 Free plastic bags are banned in Dallas, as of January 1, 2015. Greencotton
Dwaine Caraway, displaying reusable canvas bags, was the driver behind the new law. Photo by Claire St. Amant

Dallas' new plastic bag law went into effect on January 1, requiring supermarkets and other retailers, such as convenience stores, malls and boutiques, to charge a nickel for every "single-use carryout bag." The new law is designed to discourage people from using plastic bags in order to reduce litter and help the environment. Restaurants, dry cleaners and prescription drug purchases are exempt. Some stores are also exempting paper bags with handles, by claiming they're reusable.

While many shoppers are already in the habit of bringing their own bags, the new law has retailers clucking about costs and inconvenience. Kroger spokesman Gary Huddleston moaned to NBCDFW that the company had to produce new signage and order separate bags for their nine Dallas-area stores, at their own expense.

As you can imagine, it's very vexing that a company may have to spend extra money to accommodate a law that helps the environment.

The plastics industry does not want this ban and is spending millions to change the conversation and spread ignorance about the realities. Myths have surfaced in social media channels regarding plastic bags. As a public service, we're clearing those up.

Myth #1: It is our constitutional and/or God-given right to get free plastic bags at the grocery store.
Being forced to pay a nickel for a plastic bag or bringing your own bag to the store is indeed a giant inconvenience. It's possibly another step in our inexorable decline into a nanny state, where we are forced to consider someone or something besides ourselves. Ick. Having the freedom to get our groceries packed for us in plastic, that we can callously, even gleefully, toss aside minutes later, is surely an inalienable right? But disappointingly, there is no provision regarding plastic bags in the Constitution or the Bible.

Myth #2: You will be forced to carry your groceries home one item at a time.
Wah if there are no free plastic bags, how can we get out groceries from Point A (the supermarket) to Point B (our refrigerator)? Good news: Plastic bags are still available! They'll just cost you 5 cents. As well as an entire array of sack-like objects people have used over the centuries to transport goods. You could put them in a knapsack. A large bandanna. A box. There are even reusable bags, made of canvas or recycled plastic, which you can bring with you when you enter the store. (There's no getting past the fact that bringing your own bag makes you look like a pussy or, worse, like someone who thinks ahead.)

Myth #3: This law is a plot by President Barack Obama.
President Obama did not have a personal hand in the bag law in Dallas, nor the laws passed in Austin, Santa Fe, Seattle, Portland, Los Angeles, San Francisco or the entire state of California. He's too busy turning our country into a socialist republic. He doesn't have time for little things like plastic bags.

Myth #4: This will destroy the economy in Dallas.
There are surely many shoppers, like agitated commenter Amber on this Dallas Morning News story, who says, "Will be shopping in cities that surround the City of Dallas. Done!!" But if you factor in the cost of driving to a neighboring city, you're spending additional $1-$2 on gas. To save 5 cents. But that's OK, Amber!! You've made your point!!

Myth #5: Plastic bags were previously free.
The price of plastic bags has always been factored into the price of groceries, not to mention what you pay in taxes to civil servants to clean them up. You've been paying for plastic bags all along! Sucker.

Preston Hollow: Where to find some of Dallas' best architectural gems
Hollywood Heights: Trees galore and eclectic architecture in East Dallas
Grapevine: Raise a glass to a picturesque area steeped in history

Here's how to get a prescription for medical cannabis in Texas
Celebrate 4/20 with the state's first Texas-owned medical marijuana dispensary
Texas is expanding access to medical marijuana. Do you qualify?