Watch Out, Angie's List
ClubLocal aims to change your life

Charles Taylor (left) and Breck Woolsey met in California, but both have Texas roots. Photo courtesy of Breckinridge Taylor 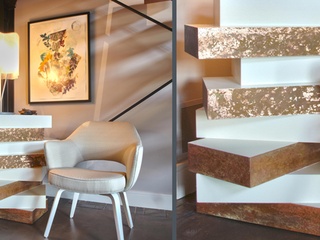 Taylor and Woolsey are known for incorporating unexpected and interesting pieces into their designs. Photo courtesy of Breckinridge Taylor

The more creative the individual, the less he ages. It would certainly be an interesting theory to test. And designer Breck Woolsey would be a perfect candidate.

Woolsey was born and raised in Dallas and moved to California to attend art school. After living in Los Angeles and San Diego, he returned to Dallas in 2007 to be closer to his family and to work on projects like Cedars Social.

​“The opportunities in Dallas have been incredible,” Taylor says. “There are lots of open doors for small businesses.”

Quite refreshingly, rather than molding his signature — though ever-evolving — design aesthetic to the comfortable styles of his new surroundings, Woolsey never steered from his unique vision unless forced.

Judging by his continued success and the growing recognition of his newest business venture, Breckinridge Taylor, it was a savvy decision.

Two Texans get together
The newly wed Oak Cliff resident has launched an interior design firm and furniture line with his business partner, Charles Taylor. Woolsey and Taylor met while working together on projects in San Diego.

Taylor, another Texas native, who grew up in Fort Worth and Houston, moved to California to open a design store. Like Woolsey, he eventually returned to Dallas to be closer to his family. Those family ties are strong.

When Woolsey and Taylor found themselves back in Dallas, it seemed a natural fit to begin a business together. The greatest challenge was warding off their personal projects long enough to form the company.

“We kept delaying the initial launch because we couldn’t seem to find time to simply finish the LLC papers,” Taylor says. “The opportunities in Dallas have been incredible. There are lots of open doors for small businesses.”

​“We’re bringing to Dallas what we see happening now — or simply where our tastes are leading us,” Woolsey says.

Their collaborative style has a vintage appeal, but it’s also an eclectic assortment of traditional, midcentury and contemporary elements punctuated with unexpected shapes and finishes.

“It can seem Dallas is sometimes around two years behind the coasts on trends,” Woolsey says. “We’re bringing to Dallas what we see happening now — or simply where our tastes are leading us.”

A blooming business
In addition to their design firm, which handles residential and commercial projects, such as several local Osgood O’Neil salons, Breckinridge Taylor has collaborated with Mecox to create a furniture line. Woolsey says that Mecox picked up the line as a “pet project.” Now there are 70 wood furniture pieces on the Mecox website available in a variety of finishes.

“We have also designed a rug collection that we are selling at Interior Resources,” Woolsey adds. “We have been pleasantly surprised at the quick response and are so grateful for it. Everything seems to be moving.”

In fact, in addition to Mecox and Interior Resources, you can find a dose of Breckinridge Taylor at Plexicraft, for which they designed special edition Lucite furniture, and — soon — Again & Again.

“People come from all over the country to shop [the Design District],” Taylor says. “We have it all right here when it comes to a designer’s needs — immediate and lofty.”

“It will be Leslie’s style with updated vintage pieces, while bringing customers something they’ve never seen before,” Taylor says. “We’re ready to take it to the next level.”

These two must live in a parallel universe where there are more hours in the day, because they also have launched a furniture line called Whilom Inc., which will soon be available at Mecox. On the commercial front, Woolsey and Taylor are excited to unveil the interior of John Tesar’s new Spoon restaurant in Preston Center.

The design stars attribute their success to bloggers, tastemakers and influencers who have endorsed them. When it comes to their own endorsements, both are inspired by the new Perot Nature and Science Museum, set to open in December.

“I love the architecture and the thought behind it,” Woolsey says. “It’s so out there, so original. I’d like to see more in Dallas like it — not necessarily similar to the building, but the idea [of it].”

Their favorite Dallas area to watch right now is — not surprisingly — the Design District.

“It’s truly amazing,” Taylor says. “People come from all over the country to shop our design center. We have it all right here when it comes to a designer’s needs — both immediate and lofty. And, with the bridge, you’ll soon see more restaurants, living spaces and hotels. We can’t wait.”

Like so many of us, their fall calendar is filled with charitable events.

“We’re participating in a Habitat for Humanity competition and a Dwell With Dignity event,” Woolsey says. “We’re going against women. We’re so done.”

Charles Taylor (left) and Breck Woolsey met in California, but both have Texas roots. Photo courtesy of Breckinridge Taylor

Taylor and Woolsey are known for incorporating unexpected and interesting pieces into their designs. Photo courtesy of Breckinridge Taylor