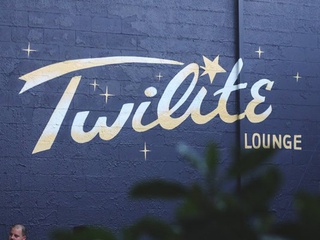 The Twilite Lounge offers a bit of the French Quarter in Deep Ellum.  Photo by Yelp

The interior is bathed in rich reds and gold to create a comfortable atmosphere.  Photo by UrbanDaddy

Let’s start with the important stuff — the Twilite Lounge is not a good name for a bar. It might even be a bad name, if one were to really hold an opinion about bar names.

Never mind the silly spelling; anything referencing twilight these days is sure to invoke sparkling vampires, actresses who cannot smile, and dangerous ethnic werewolves who refuse to wear shirts.

The good news is that’s about the worst thing I can say about the Twilite Lounge. Situated on Elm Street in Deep Ellum, next to the Anvil Pub — now there’s a name you can set your watch to — Twilite carries a strong New Orleans vibe.

Comfortably open and replete with rich, burgundy booths that stretch to the back of the bar, there’s enough space to sit at a table or the bar — or just stand about without smothering your fellow drinkers.

It’s casually receptive and feels like a bar that’s existed for more than a few months. A couple of TVs rest above the bar to keep sports fans satisfied without distracting from the overall experience.

The gold and roseate wallpaper compliment the booths and the chandeliers to imbue a richness throughout the bar that’s reminiscent of a mixture of the Quarter Bar and the Hi/Lo Lounge at the Mansion Bar.

The draft beer list is short, but devoted to quality crafts both locally (Lakewood’s Temptress) and nationally. Plus, the canned and bottled list is more than sufficient. And the cocktail list stays in the single digits while exhibiting a devotion to classic drinks like Cucumber Fizz and a twist on the Dark ‘n’ Stormy called the Black ‘n’ Stormy.

I ordered a house Sazerac, because, well it’s a New Orleans bar. The bitters provided an adequate balance to the simple syrup while complimenting the rye’s spice. It sipped smoothly enough that I found myself savoring it more slowly the emptier my glass became.

And while the Cucumber Fizz refreshed my palate after the fulsomeness of the Sazerac and worked to stave off memories of the evening heat, it was not lacking in cucumber. I enjoy cucumber, but the drink was too sweet and cucumber-y for the small bite of Tito’s or lime juice to make more than a cameo.

I later learned from Gabe at the Black Swan Saloon that there’s often live music at Twilite and that I had missed a jazz band by two days. Slobberbone is known to play, and there’s even been an open mic comedy night.

My timing has never been great.

Before leaving, I decided to explore the patio in the back. It was clear that I had made a mistake by not checking it out when I first arrived. The inside is nice, but the patio is like some sort of burgeoning secret garden. It evoked twilight, which, yeah.

Growing vines decorate the high sidewalls that allow the night sky in but little else. It’s a surprisingly spacious opening that manages to keep everything quietly intimate. A handful of iron tables fill the back four-fifths with a small strip of stools and bar top along the front complete with a TV. I may have had a flashback to Pat O'Briens.

The Twilite Lounge isn’t a great bar; it’s perfectly serviceable with an established attitude that doesn’t try too hard to put you in the French Quarter, but still serves as a reminder of what the Crescent City offers.

The Twilite Lounge offers a bit of the French Quarter in Deep Ellum.  Photo by Yelp