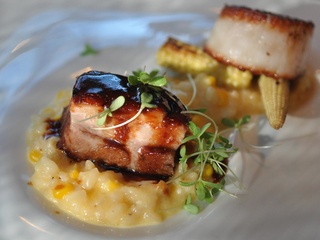 Sugarbacon's signature dish will be pork belly with a barbecue glaze, similar to this. Triniti Restaurant/Facebook
Sugarbacon will open in downtown McKinney. Photo courtesy of City of McKinney

After more than 30 years in the restaurant industry, hospitality veteran Johnny Carros is breaking out on his own with a new restaurant in McKinney called Sugarbacon Proper Kitchen.

He's partnered with chef Jon Thompson, who previously worked with Stephan Pyles at both Stampede 66 and Samar, where he was opening chef. The restaurant is slated to open in mid- to late June.

Most recently at Jasper's, Carros has worked for restaurants such as Chamberlain's Steak & Chop House, Sullivan's of Dallas and Del Frisco’s Double Eagle Steak House. This represents the fulfillment of a dream, he says.

"I'm in the right place and right time for this," he says. "I've worked alongside some of the best restaurateurs in this city. But it's always been a longtime dream to have a partnership in a restaurant."

The name was chosen mostly as a feel-good kind of thing, but there is a signature dish called sugarbacon, consisting of crispy pork belly with a barbecue sauce glaze, which Carros describes as smoky and sweet.

"We felt we had to make a namesake dish that matched the name," he says. "Our cuisine is New American with a little bit of Texas undertones. But not over-the-top Texan. Just clean, classic New American."

Thompson says he envisioned the menu as approachable.

"We want to make people happy with the food," Thompson says. "In the past, I've felt like I was cooking to get accolades and the stars. That's another style of cooking. But I wanted to do something that reflects the community."

In their view, that means sophistication and accessibility. "We're for people in McKinney who are looking for something with a downtown flair but don't want to go downtown," he says.

They'll be open for lunch and dinner Monday-Saturday and maybe add Sunday brunch down the road.

Their cocktail program is designed by Sean Conner, formerly of Whiskey Cake and owner of Pie 3.14 in Castle Hills.

"It''ll be simple drinks with fresh ingredients done really well," Carros says. "One thing I see with craft cocktails is that sometimes they're complicated but not executed consistently."

Eight beers on draft will all come from Dallas-Fort Worth breweries, but the wine program will be sourced globally, to best pair with the menu.

Sugarbacon is opening in cool vintage building that was once a gas station. Its legacy can be seen in the two perfectly restored pumps in front. "There's no gas to pump, but they're decorative and look really cool," Carros says.

The restaurant will hold about 208 seats, with an additional 48 on a climate-controlled patio.

Both Thompson and Carros live in Collin County and are enthused about opening in McKinney.

"It's a destination," Carros says. "This whole community is a pedestrian paradise. It almost feels like it's a Hollywood set.

"It's unlike anything else in the area, and it's the most friendly, welcoming community I've ever been a part of. I could not imagine Sugarbacon being born anywhere else."