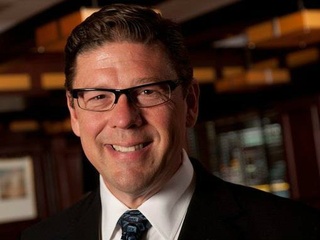 Former MCrowd CEO is opening his own place at Preston and Forest this fall. Photo via Facebook

Restaurateur Michael Cox has selected a chef for his new restaurant, Oso Food & Wine: Kelly Hightower. Hightower is a culinary veteran who has worked at Aquaknox, The Mansion on Turtle Creek, Tei Tei Robata Bar, Ziziki's, Hattie's, Nova and Wild Salsa. He was also owner/chef at Kavala in Oak Cliff.

According to a release, Hightower is excited and honored to lead the kitchen at Oso.

"I will draw from a healthy respect of Mediterranean flavors, Japanese technique and frequent travels to Latin America," he says. "Michael is giving me the freedom to create and share my vision of food, which is very refreshing. We both share the same values in caring for or guests and staff.  We hope to create a great neighborhood restaurant."

Cox was besieged by candidates, but had a previous working relationship with Hightower at Aquaknox.

Oso Food & Wine is the creation of local veteran restaurateur Michael Cox. Unfortunately, Cox is trying to put it out there in all caps: OSO. Cox, can't it be Oso instead? Do we call you COX? No. The restaurant is scheduled to open by mid October in North Dallas at the northeast corner of Preston Road and Forest Lane. Oso will be open for dinner only and then will open for lunch in early 2015.